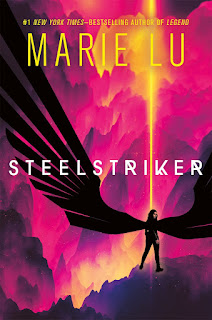 As a Striker, Talin was taught loyalty is life. Loyalty to the Shield who watches your back, to the Strikers who risk their lives on the battlefield, and most of all, to Mara, which was once the last nation free from the Karensa Federation’s tyranny.

But Mara has fallen. And its destruction has unleashed Talin’s worst nightmare.

With her friends scattered by combat and her mother held captive by the Premier, Talin is forced to betray her fellow Strikers and her adopted homeland. She has no choice but to become the Federation’s most deadly war machine as their newest Skyhunter.

Red is no stranger to the cruelty of the Federation or the torture within its Skyhunter labs, but he knows this isn’t the end for Mara – or Talin. The link between them may be weak, but it could be Talin and Red's only hope to salvage their past and safeguard their future.

While the fate of a broken world hangs in the balance, Talin and Red must reunite the Strikers and find their way back to each other in this smoldering sequel to Marie Lu’s Skyhunter.

Steelstriker is the final installment in author Marie Lu's Skyhunter duology. It has been 6 months since Premiere Constantine conquered Mara, the last free nation not under the Federation's iron fist. Told in alternating perspectives from Talin Kanami and Red, we get an inside look at both the rebellion and the Premier's desperate hold on to the territories he has conquered before they rebel and declare independence. You definitely need to read Skyhunter first, otherwise you will have no clue as to what Talin gave up in order to become the Premier's newest weapon.
Talin sacrificed her life in order to save her mother. She's been turned into a Skyhunter, and a monster. Her bones have been forged with steel and it makes her nearly indestructible. Especially when she opens her new wings. She also knows that if she strikes out at Constantine in any way, her mother will follow him to the grave. But that doesn't stop Constantine from hunting Red and the remaining Strikers who managed to survive the battle for Mara and the subsequent tearing apart or Mara piece by piece while looking for Early One's technology which could lead to Constantine's immortality.
Meanwhile, Talin learns that a rebellion is brewing. There are key members of Constantine's team who want him replaced at all costs. But, with Talin connected to Constantine like she's connected to Red, and her mother being moved from place to place to keep Talin from finding out where she's being kept under guard, what more is there for her to do? Rely on Red and her friends to do the hard and dirty work that's what. No, I am not being sarcastic. For almost the entire book, Talin isn't the girl who showed up in Skyhunter. She has no idea how to speak, since she can't speak, to others and let them know what's going on. The only people she can talk to are Red and her mother who know how to use sign language.
Red spends most of this story with Jeran, Adena, and Arman the last remaining Strikers. After they are caught in a trap, Adena and Arman are forced into facing off in a life or death game. If anyone survives, the winner will have to face off against Talin, Constantine's newest war machine. Red is no stranger to the cruelty of the Federation or the torture within its Skyhunter labs at the hands of Raina, the Chief Architect. But he knows this isn’t the end for Mara—or Talin. The link between them may be weak, but it could be their only hope to salvage their past and safeguard their future. The author explores part of Red's history as a soldier of the Federation and how he comes to bond with the Strikers who once thought he was going to betray them.
Would have liked this book more and rated it higher, but the best part of this book was the ending as well as Adena and Arman fighting in a dangerous maze like coliseum. There's little action from Talin, and most of what there is, it's from Red and Jeran as they attempt to save their remaining Strikers. There's a lot of fill in and dragging feet, and the author jumps the shark by personally adding in her personal political beliefs into the story by way of making Constantine represent the alleged person she apparently hates with a passion.
I did like the fact that Talin's mother wasn't your atypical YA mother who disappears and she's never seen or heard from again. She's part of Talin's life from the day they were forced to flea their former homes, to Mara, to being held prisoner by Constantine. She's there when things don't look so good for Talin, and manages to stay by her side through thick and thin and comes to accept Red and Talin's connection. As I said, political views have no business in novels. You can respectfully disagree with me if you like. But we live in a world where everyone seems to hate everyone else no matter who they are and whether or not they are innocent or guilty of being on the opposite side. This has to stop of there's no point of keeping this country as 50 states.