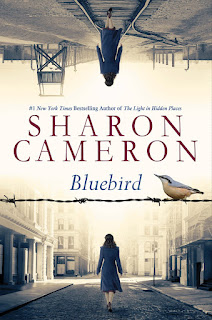 In 1946, Eva leaves behind the rubble of Berlin for the streets of New York City, stepping from the fiery aftermath of one war into another, far colder one, where power is more important than principles, and lies are more plentiful than the truth. Eva holds the key to a deadly secret: Project Bluebird -- a horrific experiment of the concentration camps, capable of tipping the balance of world power. Both the Americans and the Soviets want Bluebird, and it is something that neither should ever be allowed to possess.

Sharon Cameron, author of the The Light in Hidden Places, which I recently read and reviewed, weaves a taut and affecting thriller ripe with intrigue and romance in this alternately chilling and poignant portrait of the personal betrayals, terrifying injustices, and deadly secrets that seethe beneath the surface in the aftermath of World War II. This story takes place alternatively between 1945, 1946, with a brief stop in 1947. Who is Anna Ptaszynska?
Is she Eva Gerst who arrives in the US in August of 1946 along with Brigit Heidelman who suffered greatly at the hands of Russian soldiers? Eva has a dark secret and revenge on her mind and 27 names on her lips hoping to find the notorious Doctor Von Emmerich who experimented on thousands of prisoners in Sachsenhausen. Or, is she Inge Von Emmerich, daughter of Dr. Von Emmerich, the sole remaining member of the family who may be one of the good Doktor's experiments?
When Eva arrives in America, Eva is ordered by the CIA to participate in project Bluebird – a plot to find a Nazi doctor who was working on developing mind control and is hiding in the US to avoid the Nuremberg trials. and want to know where her father is. That Nazi doctor turns out to be her own father, a brutal man who experiments on people of all ages. Eva wants revenge for the prisoners that were experimented on and for Brigit who was horribly assaulted by Russian soldiers.
But she soon finds out that the CIA isn't the only ones who want to get their hands on Dr. Von Emmerich. The Soviets are patiently waiting for the CIA to screw up so that they can quickly grab the good doctor and force him back to the prison where he left thousands of innocents scared for life, or dead. Two for allies now enemies are eager to collect as many German scientists as they can before they disappear for good. Eva/Brigit's journey is uncomfortable at times. She starts off as member of a German Nazi group, and later realizes that everything she was told was propaganda to brainwash the masses.
She was encouraged to hate Jews, and turn them in whenever she saw one. On her arrival in the US, she meets an assorted group of people from all walks of life and they are not the awful people she was taught to believe. She befriends a group of individuals at the Powell House and The American Friends Service Committee who have escaped from Europe and are hoping to find a better life in America. Here she meets Jake Katz who she has to eventually either trust, or get rid of for feat that he will be another casualty in a mixed up tug of war between two enemies.
Props to Sharon Cameron for all the research and time and valuable sources she used to write this book. They are invaluable to someone like me who loves to read Historical fiction.   Project Bluebird was real, and may still be. Who can really trust what the CIA is doing, or what they're not doing? BLUEBIRD is the cryptonym for a CIA mind control program that ran from 1951 to 1953. Other mind control programs include ARTICHOKE, MKULTRA, and MKSEARCH.
Fact: Sachsenhausen or Sachsenhausen-Oranienburg was a German Nazi concentration camp in Oranienburg, Germany, used from 1936 to the end of the Third Reich in May 1945. It mainly held political prisoners throughout World War II. The former Soviet Union took it over in May 1945.  26,000 Polish children were stolen from their families and integrated into Germany society by Nazi soldiers. This may be the most unreported fact of the entire aftermath of World War II. These children almost never found their way back home.
Powell House and The American Friends Service Committee are real, and did some wonderful work thanks to those involved. Their mission was peace and friendship. It's something we need in the US right now to bridge between hurdles, anger, and resentment of our own people.  Even though this is marked as Young Adult, I think, and I urge that those older pick up this book and read it. The more you know about he past, the less likely it will carry over into the next generations.