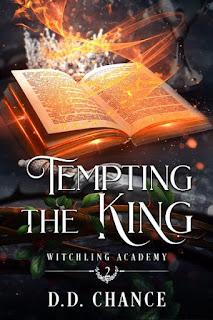 What’s the only thing worse than fighting the king of the Fae? Pushing him too far.

I taught witchling magic to the High King of the Fae. I helped him defend his realm. And then in the fullness of his generosity, he set me free. Great story, right?

Only, like most things when it comes to the Fae, ditching a contract with these guys isn’t so easy.

Turns out the magic that binds me to the deeply sensual, fiercely proud, ridiculously hot High King is far more twisted than I realized. I’ve been marked for death…or something way worse.

Now I’m on the run, my home destroyed, being chased through a realm of myth and monsters by more enemies than I ever thought possible. To break free of this screwed-up Fae contract for good, I’ll have to unravel a scheme three hundred years in the making and convince the king—who’s been tricked into falling in love with me—that he’s been played for a fool.

This should go well.

Tempting the King is the second installment in author D.D. Chance's Witching Academy Trilogy. This book begins where Teaching the King finished. As the story picks up, Belle Hogan is in a lot of trouble. The one thing she owns in the world has been attacked by her enemies which her mother and grandmother had been hiding from for years. Thankfully, a portal opened that sent Belle to a Monster realm known as Riven District. It appears as though those in charge are lizard like creatures with forked tongues and they may be into very dark, and dangerous magic.
Riven district is apparently a place where outcasts, sleazeballs, and bad actors end up. Anyone who is sent to Riven has either been cursed, or decreed they be sent here. Belle has been cursed by witch magic. Belle discovers a woman named Celia who has been stuck in this world for the past 5 years. Who is Celia? Is she a witch? Is she a shifter? Is she trouble, or will she be Belle's ally against what's to come? Thanks to Aiden and his second in command Niall, Belle and Celia are brought back to Fae where Belle is to continue teaching at Witchling Academy.
Belle has a contract, (which she hasn't yet had access to, but believes it may be held at the mountain Fae's Sakorn Castle), that states that she has to teach Aiden, the King of the Fae, and those in his line all about magic which has been fading away since her descendant Reagan Hogan found a way to escape Fae. With every day that passes, Belle's magic gets more powerful as does her connection to Aiden. But so doesn't Aiden's. The book also introduces readers to the Dwarves who live underground, just love to war on the Fae, and know all about Belle and her family.
To reiterate what has already happened, war is coming, and Belle is right in the middle of what's to come. The Fomorians have found a way back from their banishment, and have already started warring against Aiden's people which makes Aiden sit up and actually take notice that for far too long, the Mountain Fae, and others have been ignored by his family. If the Fae are to win, and survive, Aiden must stand up and be the king the Fae need desperately. That includes asking so called lesser Fae to stand with him and fight for their survival.
This is the second consecutive story that ends on a brutal cliffhanger ending. Thankfully, the author has promised the next installment sometime around Thanksgiving which isn't that far away. This series just happens to be the third in the authors Boston Magic Academy cycle following Twyst Academy and Monster Hunter Academy.