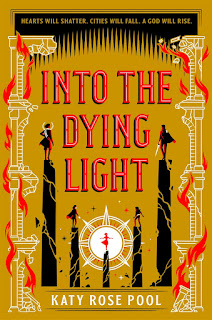 Six of Crows meets Graceling in this jaw-dropping conclusion to the swoon-worthy and action-packed Age of Darkness trilogy—hearts will shatter, cities will fall, and a god will rise from the ashes.

Following the destruction of the City of Mercy, an ancient god has been resurrected and sealed inside Beru's body. But both are at the mercy of the Prophet Pallas, who wields the god’s powers to subjugate the Six Prophetic Cities.

Meanwhile, far away from Pallas Athos, Anton learns to harness his full powers as a Prophet and discovers the truth about how the original Prophets created a weapon capable of killing a god. Along the way, the group’s tenuous alliance is threatened by mounting danger, impossible romances, and most of all by a secret that Anton is hiding: a way to destroy the god at the price of an unbearable sacrifice. But the cost of keeping that secret might be their lives—and the lives of everyone in the Six Prophetic Cities.

Into the Dying Light is the third and final installment in author Katy Rose Pool's The Age of Darkness trilogy. This story, as with the past two installments, revolves around (5) main characters: Beru who is now possessed by a God who was once banished by seven prophets; Prince Hassan, who lost his Kingdom to betrayal by his own flesh and blood and Pallos Athos; Ephyra, Beru's sister aka called the Pale Hand of Death who has been held prisoner for the past 2 months to keep Beru in line; Jude, who left his order behind to follow and protect Anton, aka the Last Prophet who has been training with the woman known as the Wanderer to find a way to defeat the God.

With the Age of Darkness on the horizon, and Beru slowly losing herself to the God who is angry at humanity and wants to destroy everything in sight, and the fight against the Hierophant going badly, unusual allies need to put away their hatred and their own issues and find a way to save the remaining cites named after the first prophets. What’s most interesting is none of the characters are perfect heroes. They’re very real and each have their own reasons that drive them to make the choices they make.

Ephyra is very much a protector for Beru and is trying to do everything she can to help her - although she must learn that sometimes the best thing she can do is let go and allow Beru to make her own way. Ephyra's growth from the Pale Hand of Death to someone who can actually heal, and maybe, just maybe help save people, was impressive to read. Beru's inner conflict and turmoil with the god inside her as well as her bravery and willingness to sacrifice for others made her the most interesting character, as well as the final part of this story which, no, I won't spoil.

I have to feel a bit for Hassan. After being dethroned, and learning that he's not the final prophet, he only gets to really shine when he finally picks up the mantle and stands to help save his country. I have to say that I was not impressed with either Jude or Anton. Anton was hiding secrets about how to defeat the God, and what cost it would be on Jude, and Jude thought that if he sacrificed himself for Anton, that the world would be quite alright with whatever happens afterwords. The rest is filled with shenanigans.

While attempting to take down the Hierophant, there are more than a few entanglements between characters. For instance, Ephyra and Illya have been dancing around each other for the past two books. Who is Illya you ask? Anton's brother who tormented him as a child. The couple hates each other, but are drawn to each other like a moth to a candle. Each burns bright, and both have made plenty of horrible mistakes. Ephyra's mistake is not trusting her own sister to find her own way without her around to protect her.

The second couple is Hassan and Khepri who we learn was also held captive by the Hierophant for months and nobody knew where she is. I respected the authors choice for what she did to this couple, and how things seem to play out even when danger is on the horizon. Khepri, like Hector, and Illya are important secondary characters not to be trifled with. The third couple, of course, is Anton and Jude. Jude is an oathbreaker having walked away from his duties. He did so because he found his heart belonged to Anton, and there's nothing in the entire world that will change that.

But let's not forget about Beru and Hector. Hector has a way of calming Beru, and they are both angry at Ephyra for her actions in the previous installment which led to Beru being possessed. Will any of these couples survive to see their happy ending? Read the book!