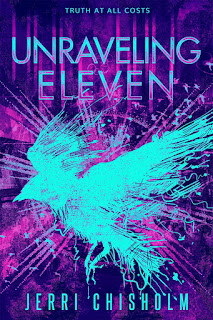 If Eve Hamilton cannot contain the monster inside, she’ll lose everyone who is important to her in this thrilling follow-up to the 2020 dystopian Escaping Eleven.

At long last, Eve Hamilton has realized true freedom. It is electrifying, intoxicating, divine. But much too quickly, it is wrenched from her grasp. And this time, the awaiting corridors of Compound Eleven are even less friendly than before. This time her list of enemies has grown exponentially, and her survival is far from a given—even with Wren Edelman by her side.

Yet her brief taste of freedom has left her with something useful, something powerful, something that terrifies the leaders of Compound Eleven: knowledge. Together Eve and Wren use it to uncover secret after secret, ones so twisted that everything they have ever known is thrown into doubt. Secrets that are so dangerous to wield that mere awareness can spell certain death.

But Eve soon discovers that despite a long list of enemies, despite uncovering secrets worth killing for, her greatest adversary lies deep within. And if she can't contain the monster inside, if she can't stop committing unspeakable acts of cruelty—ones she never thought she was capable of—she will lose everything that is important to her and everyone she holds dear.

Unraveling Eleven is the second installment in author Jerri Chisholm's Eleven Trilogy. This story begins right where Escaping Eleven finished. 16-year-old Eve Hamilton (Lower Level Mean) and 18-year-old Wren Edelman (Prime) have done what nobody else has without being expelled. They've escaped Eleven and discovered that the world isn't what they've been told their entire lives. Instead of a world where people burn up as soon as they step outside, it is a world that is exciting, and terrifying all at the same time.

Eve hoped to find out if her brother Jack, who was disposed of when he was three for being an extra body, is still alive, or gone. Him being forcibly removed from Eleven has weighed on her conscious for 9 years. But without a food source, or water, and a dangerous encounter with an unknown beast, Eve and Wren return to Eleven where Eve will find that she doesn't have just a few enemies, she has made powerful enemies than she could ever imagine. Now, Eve has to deal with a verification trial, as well as choosing her future.

If you haven't read this series, Four generations ago, Earth was rendered uninhabitable, the sun too hot, the land too barren. Those who survived were forced underground, where civilization divided into compounds. In Compound Eleven, only the cruel survive. Fighting is entertainment, violence is a way of life, and hierarchy is everything. For the Primes who inhabit the fifth floor, life is comfortable. For the Lower and High Means and the Denominators who live on the floors below, it is anything but.

Residents are literally trapped in a box underground under the leadership of Preme's who rule the compound while those like Eve are expected to fall in line, or be cast off. When Eve returns to Eleven, she's a changed person. One could say that she becomes even more angrier than before. She hasn't forgiven her former best friend Hunter for his betrayal. She's having issues with choosing what she wants to do, and then decides to try to be a Guard which would give her access to certain places in the compound.

In a major twist, Eve discovers a new possibility; a life outside the compound along with others who have survived other compounds as well as living outside. Can you imagine Eve's reaction? She's tried hard to gain access to the Oracle where she's watched the sun rise and she didn't want to remain any longer. She has parents who are either out of touch with reality, or demanding that she fight for a living. She's hounded by powerful Primes who want to silence her. She's hounded by guards who have pushed, and pushed, and pushed until she can't take it any longer.

When guards begin to become targets, those in charge take a hard look in Eve's direction. Those in charge know that she's more dangerous than anyone they've encountered in a long time. Eve wants freedom, she wants revenge, she wants her alleged boyfriend to stop playing games and either stand with her or get out of the way. When push comes to shove, Eve has to make a choice. Stay and fight, or leave and begin a new life among new friends who aren't judgy. This story ends with so many twists, and turns that I can't wait to see what happens next.