#Review - All of Us Villains by Amanda Foody, Christine Lynn Herman #YA #Fantasy 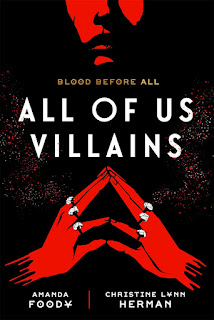 The blockbuster co-writing debut of two up-and-coming powerhouses, All of Us Villains is The Hunger Games with magic

You Fell in Love With the Victors of the Hunger Games.
Now Prepare To Meet the Villains of the Blood Veil.

Every generation, at the coming of the Blood Moon, seven families in the remote city of Ilvernath each name a champion to compete in a secret tournament to the death.

The prize? Exclusive control over a secret wellspring of high magick, the most powerful resource in the world—one thought long depleted.

But this year a salacious tell-all book has exposed the tournament and thrust the seven new champions into the worldwide spotlight. The book also granted them valuable information previous champions never had—insight into the other families’ strategies, secrets, and weaknesses. And most importantly, it gave them a choice: accept their fate or rewrite their legacy.

Either way, this is a story that must be penned in blood.

All of Us Villains is the first installment in co-authors Amanda Foody and Christine Lynn Herman's All of Us Villains series. While there are seven champions, there’s only four perspectives in the book: Alistair Lowe, Isobel Macaslan, Gavin Grieve, and Briony Thorburn, with Finley Blair, Elinor Payne, and Carby Darrow as secondary characters. For the first time in 20 years, this year brings the arrival of the Blood Moon and its tournament to see who is the strongest. These are the same kids who grew up together, were friends, and even lovers, and now they will be enemies.

7 families in the remote city of Ilvernath each name a champion to compete in a tournament to the death. Instead of being picked at random, the champions are chosen by their families. Some having been forced into the role by their family and would like nothing more than to escape. The prize? Exclusive control over a secret wellspring of high magick, the most powerful resource in the world—one thought long depleted until the next tournament. Only one family line may claim the magick, and only after defeating the other six competitors by winning the tournament in a fight to the death. Very much like the Hunger Games except with magic.

In this tournament, there are 7 Landmarks, and 7 Relics that fall from the sky throughout the tournament. Gain one of the relics, and it will give you powers to use on your rivals. Gain one of the Landmarks which corresponds to your family, and it becomes your castle. Thanks to a salacious tell-all book, A Tradition of Tragedy, the tournament and the champions have been thrust into the worldwide spotlight while also exposing the truth about high magick still being around.

This years competition has everyone talking and more visitors that usual to the sleepy town as well as a representative of the Kendalle Parliament who is deciding if they will execute everyone involved. The book granted the public valuable information previous champions never had—insight into the other families’ strategies, secrets, and weaknesses. Between each chapter, there are sections of the book that outlines different aspects of the challenge. Pay close attention.

Alistair belongs to the Lowe Family. They are the winningest family of all seven and are will do do the shocking things imaginable to win. Alistair is wicked and vicious, yet he would do anything for his brother and wants his family to be proud of him and to love him. Alistair and his brother Hendry are nearly inseparable thanks to the families rather unorthodox way of raising the boys.

Isobel belongs to the Macaslan's. Because she was the first champion outed, she's become a paparazzi darling and talented spellmaker of the family, but her family is viewed as distasteful vultures by the rest of the Seven. Isobel is her family’s champion because she is the strongest, but she never wanted to be part of the tournament and is stuck between her loyalty to her family, and her desire to flee.

Gavin Grieve comes from the weakest family, the one everyone makes fun of, the one that never ever won a tournament, and he is determined to prove to everyone that the Grieves family is worth something which means trusting cursemakers to make him stronger and able to stand against the rest of his nemesis.

Briony Thorburn was born-for-heroism of the respected family but commits a grave sin at the beginning of the tournament after learning that there may be a way to permanently end the tournament forever. Now she has to convince the other six to lay down their goals of winning, while finding the right combination to destroy the tournament. Then there's the real villain of the story.

One cursemaker in particular puts ideas in the aspiring champions’ heads about whether the tournament’s curse can be changed—or broken. The competitors teeter wildly between heroism and villainy, especially once the tournament starts and their preconceived ideas of themselves and each other are challenged in lethal combat. I do have to issue a warning to potential readers: this book ends on a massive cliffhanger. I can't in good conscious review a book without telling you that expect the unexpected. Expect to be shocked. Expect to be stunned, and expect to hold onto your seat for a wild ride right to the last page of this book.