#Review - Bluebeard and the Outlaw by Tara Grayce #YA #Fantasy #Retelling 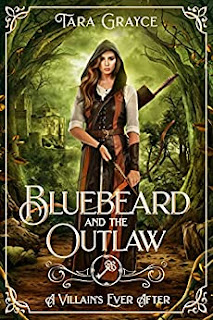 Robin of the Greenwood spends her days robbing from the rich to feed the poor. With her knowledge of the fae paths, she eludes all attempts to capture her. But she and her merry band of brothers never seem to get anywhere. The more she steals, the more the evil Duke Guy "Bluebeard" taxes the villagers.

When Robin discovers that Duke Guy plans to marry yet again, she conceives a plan for a final, big score. As Guy's wife, she will have access to his wealth. The lord is notorious for killing his wives shortly after he marries them, but Robin has no plans to be dead wife number four.

The only problem is that Duke Guy is devastatingly handsome, brooding, and nothing at all what she expected. If she isn't careful, she might just find that he steals her heart before she can rob his riches.

A fantasy retelling of the Robin Hood legends and Bluebeard fairy tale.

Bluebeard and the Outlaw, by author Tara Grayce, is one of twelve short novels in A Villain's Ever After, a collection of stand-alone stories featuring villainous twists on some of your favorite classic fairy tales. Read the series in any order for magical adventures … and fall in love with villains as you've never seen them before. Who said villains can't have happily-ever-afters?

This is a fun story filled heists and daring feats--pretty much anything you could hope for in a Robin Hood retelling and then goes one further by mixing in Bluebeard. Robin is basically an adrenaline junky seeking justice. Robin is the leader of her merry band of brothers, literally, they are her brothers, as they try to aid their village. Not only is Duke Guy levying too many taxes on the poor, but he’s also rumored to have murdered three wives. Robin comes up with the plan to end all plans and take care of Duke Guy forever. But is the Duke all he seems to be?

The only problem is that Duke Guy is devastatingly handsome, brooding, and nothing at all what she expected. If she isn't careful, she might just find that he steals her heart before she can rob his riches. Despite being a short story, this was much more entertaining that the first two installments in this series. There are a few bonus chapters at the end of the story. One of which includes a guest appearance from characters in her Midsummer Night's Bride story in the Stolen Brides series (all stand alone so you don't need to read the whole series in order to read it).

You don't need to read it in order to read this book or the bonus chapter the characters appear in, but I think it's more fun to know their story.