#Review - The Devil You Know by Kit Rocha #SyFy #Dystopian 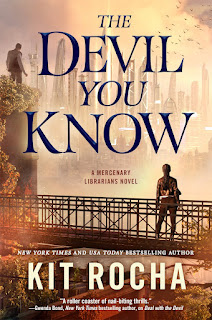 The Mercenary Librarians and the Silver Devils are back in USA Today and New York Times bestselling author Kit Rocha’s post-apocalyptic action/romance, with hints of Orphan Black and the Avengers

Maya has had a price on her head from the day she escaped the TechCorps. Genetically engineered for genius and trained for revolution, there’s only one thing she can’t do—forget.

Gray has finally broken free of the Protectorate, but he can’t escape the time bomb in his head. His body is rejecting his modifications and his months are numbered.

When Maya’s team uncovers an operation trading in genetically enhanced children, she’ll do anything to stop them. Even risk falling back into the hands of the TechCorps.

And Gray has found a purpose for his final days: keeping Maya safe.

The Devil You Know is the second installment in authors Kit Rocha's Mercenary Librarians trilogy. Kit Rocha is the pen name for the writing duo of Bree Bridges and Donna Herren who started out writing as Moira Rogers. The time period of this story is somewhere around the year 2081 or thereabouts based on the information between chapters. The Silver Devils (Gray, Conall, Knox, and Garrett) and the Librarians (Maya, Nina, and Dani) are starting to get the hang of working together—but then a job goes sideways.

Instead of the package they expected to retrieve, they find a young girl and discover she is a modified clone… just one of many. TechnoCorps is cloning children, as well as abducting them. One of those girls, Rainbow, will later become part of the family. None of our group will stand for this. Each of them went through horrors as a child and are unwilling to have more children affected. With a the group finally working together like a well oiled machine, the authors bring in a new group of characters, and some older ones like Nina's sister, who have the means and information to help the crew take down their nemesis Tobias Richter who would love to pick Maya's brain apart and expose her secrets.

This story revolves around a multitude of characters with Maya and Gray standing out for the most part. Maya is a data courier, which means she remembers everything she ever seen or heard. Gray has finally broken free of the Protectorate along with his friends Rafe, Knox, and Garrett, but he can’t escape the time bomb in his head. His body is rejecting his modifications and his months are numbered. The books best part was when Gray and Maya started training together and she picked up it quickly. Which is a good thing with what happens towards the end.

With the surprising appearance of Mason, who was supposed to be dead by Richter, things get a bit twisted. If you add Ava, Nina's sister who hired Knox to kidnap Nina and her friends, then you really have a twisted story with so many different possibilities. The story also ends on a wild cliffhanger ending which you would likely see coming if you paid attention to certain tertiary characters who were more than they seemed. It is fair to say that the third book, Dance With the Devil, will likely feature Dani and Rafe who have been dancing around each other from the first time they met.

Definitely don’t start this series here: if you haven’t read it already, go back and read Deal With The Devil first, because if you try to dive in here you’re going to be pretty confused about who’s who and what’s going on.