#Review - Echoes and Empires by Morgan Rhodes #YA #Fantasy 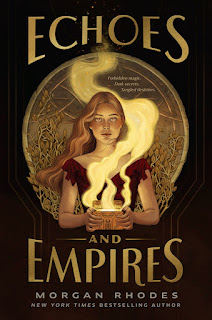 So when she’s caught up in a robbery gone wrong at the Queen’s Gala and infected by a dangerous piece of magic—one that allows her to step into the memories of an infamously evil warlock—she finds herself living her worst nightmare. Joss needs the magic removed before it corrupts her soul and kills her. But in Ironport, the cost of doing magic is death, and seeking help might mean scheduling her own execution. There’s nobody she can trust.

Nobody, that is, except wanted criminal Jericho Nox, who offers her a deal: his help extracting the magic in exchange for the magic itself. And though she’s not thrilled to be working with a thief, especially one as infuriating (and infuriatingly handsome) as Jericho, Joss is desperate enough to accept.

But Jericho is nothing like Joss expects. The closer she grows to Jericho and the more she sees of the world outside her pampered life in the city, the more Joss begins to question the beliefs she’s always taken for granted—beliefs about right and wrong, about power and magic, and even about herself.

In an empire built on lies, the truth may be her greatest weapon.

Echoes and Empires is the first installment in author Morgan Rhodes' Echoes and Empires duology. Morgan has crafted a unique fantasy world that balances mysterious magical powers with contemporary technology, creating an immersive atmosphere that readers will love to get lost in. This action-packed read is impossible to put down once you’ve started. Filled with magic, intrigue, and danger, Echoes and Empires has something for every reader—including a swoon-worthy enemies-to-lovers romance!

This is a story that is set in a fantasy world called the Empire of Regara. 17-year-old Josslyn is a name everyone in the Empire knows. She’s the daughter of the former Prime Minister who was murdered by a powerful sorcerer. Magic is outlawed and anyone possessing it are executed by the Queen. When he was murdered, Joss was taken in by her friend Celina Ambrose's family. As the 1 year anniversary of her father's death arrives, Joss is supposed to attend the Queen's Gala and put on a brave face.

As a character, Joss is unlikable. She's snobby, she's a obsessed narcissist, she's hated by almost everyone, including alleged friends, as well as Celina's father Regis Ambrose who wants her to disappear. During the party, Joss wanders into an exhibit from the alleged terrorist, Lord Banyon who is a legendary warlock. When Joss interrupts a thief named Jericho trying to steal a golden box, the magic releases and possesses Joss must flee with Jericho to help her extract the magic before she is found and killed. But Joss now possesses a powerful memories of the most dangerous man alive, Lord Banyon.

As Joss tries to get control of the magic inside of her, she's gets barraged by Banyon's memories of what really happened in the past that certain people want to keep quite. The memories show that the Queen herself has some secrets that would be her down fall if they were to come out in public. The problems Joss faces in this world will be familiar to readers—campaigns of misinformation, structures of inequality that benefit the powerful, and corruption that reaches the highest levels of government.

And while Joss’s initial goal is healing whatever magic has infected her, it doesn’t take long for her to set her sights on finding justice, too. As Joss and Jericho finds themselves in the Queen's Keep along with other criminals who enter but never come out, her development as a character grows. She's still annoying at times, and there are a few predictable events that happen towards the end of this story, but for now, I will give her the benefit of the doubt since her entire world has been upturned and there's no going back from what she's learned.

The worldbuilding was a bit unclear. There was a strange mix of modern technology, magic, and monarchy that made it hard to pinpoint the era of the story, but it had a very 1920's feel at times with all the glitz and glamour, socialites, and nobility. This might be a second-world fantasy, but it features cellphones and security cameras alongside its ruthlessly evil wizards. That mixture of high fantasy and high-tech really makes a splash. Put me down as one of those reviewers who didn't expect the book to end how it did. Although, with duologies, you can pretty much expect this sort of ending.

The sound of a crash from around the corner drew my attention. I followed the sound, curious and wanting my increasingly inebriated mind to be taken away from my self-­obsessed ruminations.

The sound had come from the Lord Banyon exhibit room, and as I entered, it took me a moment to make sense of what I saw.

Three guards lay on the ground. A fourth fell to his knees, clutching his throat before dropping heavily to his side.

The fifth stood behind the one who’d just fallen—­it was the same guard whom I’d embarrassingly mistaken for Viktor earlier.

His black-­eyed gaze tracked to me, and his expression tensed.

The multiple glasses of wine I’d consumed didn’t make it easy to process information, to say the very least, but I quickly came to the drunken realization that this Queensguard wasn’t really a Queensguard.

My gaze clumsily moved around the room, resting on each of the fallen guards. I couldn’t see any blood, but I didn’t see any movement or breathing or any signs of life at all.

“What are you doing?” I said, my words slow and slurred. “What is this?”

His expression darkened. “Listen to me very carefully. Make a move, make a sound, and I promise you’ll regret it.”

I couldn’t seem to summon a suitable comeback for that, nothing to say that would make sense of this.

He turned away from me, giving me another look at the dagger tattoo on his neck.

Crime in Ironport was nearly unheard of, so I had no idea what I was supposed to do. This sort of thing just didn’t happen here.

I wanted to open my mouth and scream, to call for help, but his threat kept me locked in place.

He stood in front of the small golden box I’d admired earlier. He pushed the glass holder back from it and grabbed the box in one smooth motion. No alarms sounded; no sudden burst of a dozen armed guards flooded the room.

The thief looked at the box for a moment, then glanced at me. “This is all I need. I’m out of here.”

Box in hand, the thief strode toward the exit until a hand darted out and grabbed his ankle. It was the last guard who’d fallen—­he was still conscious.

The thief tripped, falling to the ground hard, and the golden box flew out of his grip.

It landed right in front of me. Before I could summon my wits to pick it up—­or run away—­the lid swung wide open, and something rose from inside. It looked like golden smoke. Breath frozen in my chest, I watched as the sparkling, shimmering, swirling golden smoke rose up in a tall funnel, as tall as me. And hung there.

I heard the thief swear, a harsh and guttural sound.

Before I could move, before I could even think, the golden smoke streamed toward me, hitting me with enough force to knock me completely off my feet.

I only remember the darkness.