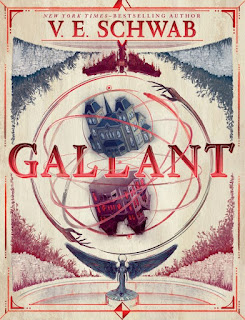 Number one New York Times bestselling author V. E. Schwab spins a dark, original tale about our world—full of life—a world that mirrors it—haunted by death—and the manor that stands between them. The Secret Garden meets Crimson Peak in this novel perfect for readers of Holly Black and Neil Gaiman.

Olivia Prior has grown up in Merilance School for girls, and all she has of her past is her mother’s journal—which seems to unravel into madness. Then, a letter invites Olivia to come home—to Gallant. Yet when Olivia arrives, no one is expecting her. But Olivia is not about to leave the first place that feels like home, it doesn’t matter if her cousin Matthew is hostile or if she sees half-formed ghouls haunting the hallways.

Olivia knows that Gallant is hiding secrets, and she is determined to uncover them. When she crosses a ruined wall at just the right moment, Olivia finds herself in a place that is Gallant—but not. The manor is crumbling, the ghouls are solid, and a mysterious figure rules over all. Now Olivia sees what has unraveled generations of her family, and where her father may have come from.

New York Times bestselling author V. E. Schwab crafts a vivid and lush novel that grapples with the demons that are often locked behind closed doors. Compared to The Secret Garden meets Coraline, Gallant is an eerie, standalone saga about life, death, and the young woman beckoned by both. Olivia Prior grew up in the Merilance School for Independent Girls. Unable to speak, Olivia has survived because most of the girls in the school believe that she's a feral girl. Olivia finds it difficult to fit in at her school where, even if she could speak, it's unlikely anyone would listen.

"We came to Gallant once, and now we cannot leave. We are bound here, chained to the house and the wall and the thing beyond, and it will not end until there are no Priors left."

The other girls are merciless in their cruelty toward her because of her differences. However, Olivia is not one to back down from a fight. Then one day, out of nowhere, a letter arrives from an unknown uncle, Arthur Prior, who asks for her to come home to his estate called Gallant. It seems that Olivia does have family, and they want her to come home to Gallant. Gallant, the one place in the world where her mother told her she would be safe as long as she stayed away. A mother that is apparently dead.

Upon arrival, she finds a manor with only two servants who weren’t expecting her and a hostile cousin barely older than her. Olivia learns that said Uncle is longer alive, and she gets immediate push back to leave from her cousin Matthew who is the only other remaining Prior still alive. So, who wrote the letter? Who lured Olivia to Gallant? Gallant is a place that is so creepy, and dark, that Olivia has to discover her own place in the world, as well as picking up the Prior family name which has led to grieve, and heart ache.

Ghouls haunt the halls of Gallant as well and a mysterious crumbling stone wall may hold the answers she seeks. Gallant is a sprawling manor with a lush garden, but it is also a crumbling house with colorless weeds. Gallant is both life and death at the same time. Prior's are the gatekeepers to a world that is a mirror of their own. Prior's have sacrificed their lives in order to keep what's behind the gates from escaping, and destroying the world with his darkness. Gallant takes the concept of locking up your demons quite literally, but that doesn’t always mean they’ll comply.

For most of the story, Olivia relies heavily on her mother's journal, while trying to put together what happened to her. Olivia can’t resist the locked door, and she finds a different version of her world on the other side. She also finds secrets of both her mother, and her father, who she's never met, origins and fates. Olivia ends up in the same cyclical place of all the other Priors, defending the door to Death and being tormented by dreams each night. A plus is the beautiful, abstract illustrations are peppered throughout the pages between the chapters, and sometimes they appear as single chapters.

If you are a reader who loves dark, creepy, gothic settings, then by all means buy, or borrow this book and have fun!