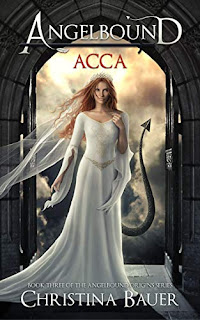 In just one week, supernatural warrior Myla Lewis must discover enough evidence to send the evil House of Acca to prison… or she’ll end up in jail herself, along with her fiancé, Prince Lincoln. No pressure.

To gather proof, Myla and Lincoln go undercover at an all-girl’s high school on Earth. Lincoln acts as the new gym teacher; Myla becomes the school’s least popular transfer student ever. To stop them from getting the goods, Acca releases Hell on Earth. Literally. Good thing Myla and Lincoln aren’t afraid of a tough fight. This one promises to be the hardest yet. After all, who ever said high school wasn’t hell?

Acca is the third installment in author Christina Bauer's Angelbound Origins trilogy. Quasi Demon Myla Lewis, aka the Great Scala, who can move souls to hell and heaven, and her fiance, Prince Lincoln of the Thrax House of Rixa, who is part Angel, are on the hunt for evidence against House Acca which has been itching to take power from Lincoln's father, King Connor. Six months ago, Myla, with her dragon scaled tail, was one of the best arena fighters in Purgatory. Then she became the Great Scala after Armageddon tried to rule.

After a demon steals their evidence stored in a Rixa Codex, Myla and Lincoln learn that a heavy hitter may still be controlling things. They only have a few days to gather all the evidence to bring before the Arbiter so she can decide the outcome of the case. The house of Acca has it in for Myla and Lincoln and wants them out of the way so they can take over Thrax so they are trying to send them to prison. With Myla and Lincoln about to be sent to jail, they manage to escape with the help of Myla's dad, Xavier, and find themselves on Earth.

They are going undercover at a school on Earth to find the evidence they need to clear their names. Myla will be going in as a student and Lincoln as a teacher. It is here they must uncover the proof they need in order to save Hell overpowering all the realms. But things are really bizzaro here. They learn that Aldred may be trying to bring back Armageddon for good if he can find the key to unlock Hell. There's lots to be said about Lincoln's father as well, but I'll reserve that for another time.

Coincidentally, it is also only a week away from Myla and Lincoln wedding day where they will become King and Queen of Thrax. The Thrax are still a bit angry at Myla for her actions in the previous installment, and needless to say, if Myla can't get through all the parties the mothers, Queen Octavia and President Camilla, insist on having, there may be bloodshed in Myla's future. A positive development, Myla still has absolutely no filter, and her tail has a mind of its own, although Myla is getting better at controlling when she says around certain people. Lincoln has had a good influence on her in that way.

Very interesting ending to this story. Which obviously means that one needs to make a choice. Continue to the next book in the series, or flip over to one of the 300 other books I'd like to read this decade. Choices. Choices.