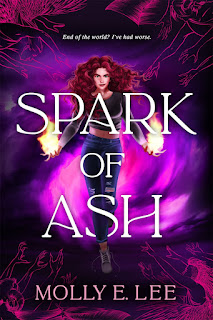 The final installment in Molly E. Lee’s compelling and compulsive angels-and-demons YA series will have readers on the edge of their seats with a conclusion no one saw coming.

The Seven—the Divine beings meant to protect the world—just declared war. On Harley. They took Ray, her baby sister, and they’re using her boyfriend, Draven, to do their dirty work.

But she’s not about to stand for that.

She may not be able to wipe them off the face of the earth right now, but she knows what can.

Thanks to an Ather connection, she’s found out about the Seven Scrolls. An ancient incantation made by the Creator to counteract the Seven’s great power, scattered into pieces across the world.

With the help of her new crew, Harley’s on the hunt. And with each located scroll, she faces new battles, bloodier and harder than she’s ever known before. But now the stakes are even higher, because Ray has always been her bright light in the darkness, and Draven is her hope when all seems lost—so what’s left if she doesn’t get them back?

Harley will become the scariest legend the world has ever known.

Spark of Ash is the final installment in author Molly E. Lee's Ember of Night trilogy. This story picks up right where Shadow of Light left off. The story is told in Draven's and Harley's POVs. Harley has been though literal Hell over the first two books in this series. After traveling to the Ather, she found out that she's the daughter of the man who the devil is based on, and she may end up having a hand in destroying the world. After her little sister Ray, and her mate Draven are taken away from her by Aphian, she accepts her birthright and unlocks Rainier from his prison.

Aphian demands the Harley find the Seven Scrolls. An ancient incantation made by the Creator to counteract the Seven’s great power, scattered into pieces across the world. Meanwhile, Draven is ordered to train Ray with her Seer powers and doesn't remember who Ray and Harley are to him. Thankfully, Harley has put together a group of individuals like Cassiel, the Angel of Death, Wallace, her Ather guide, and even Rainier, who is trying hard to make up for lost time with Harley, and trying to make her understand that what happened when she was born, was due to actions he had no control over.

Harley was supposed to be a weapon for Aphian and the Seven. But after all the danger she's been through, she's no longer interested in being guided or pushed around by abusive individuals like her stepfather and a megalomaniac who wants to change the world under his control. With her powers growing, and with seven different scrolls, in seven different locations from the Ather and Earth, Harley has her work cut out for her. To make matters even more twisted, one of the final stops on her tour de force is to come face to face with a supreme being who has stood back and didn't do anything while Aphian and his thugs were unleashing chaos on Earth and the Ather.

I gave this book a pretty good overall rating due to the fact that Harley has grown leaps and bounds since we first met her. She's powerful, she's very protective of Ray, who may end up becoming a force of her own, she has a group of people she can count on like Draven, Rainier, Wallace, Kaz, Nathan, Anka, Ryder, and Cassiel who will walk through hell with her and not give it a second thought. There are some surprises as well, and no, I don't think the ending was rushed in any way. Harley goes to battle. There are loses, and there's a heartwarming reunion with someone she thought dead.