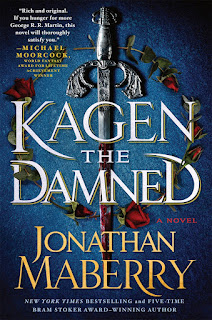 Kagen Vale is the trusted and feared captain of the palace guard, specifically charged with protecting the royal children of Gessleyn, 89th queen of the unbroken line of the Silver Lands. But one night, while Kagen is drugged by a woman in a tavern, the Silver Lands are overrun, and the entire royal family is killed and burned as a sacrifice to the dark gods of the immortal Witch-King. The once-thriving kingdom is in ruins, and the people are enslaved.

Haunted and broken, Kagen becomes a wanderer, working odd jobs and trying to take down as many of his enemies as possible, when he hears a rumor that the royal twins are still alive, and possibly being raised for dark sacrificial purposes. Kagen makes it his mission to hunt for the royal children and fulfill his oath to protect them, and train them to begin a campaign to reclaim the throne. As he hunts for the children, Kagen’s quest takes him to strange lands where he encounters the supernatural in all its many bizarre and terrifying aspects.

Kagen the Damned is the first installment in author Jonathan Maberry's Kagen the Damned series. The book is being sold as The Witcher meets Game of Thrones. Kagen Vale is the trusted and feared captain of the palace guard, specifically charged with protecting the royal children of Gessleyn, 89th queen of the unbroken line of the Silver Lands. He's also the son of the famous Poison Rose who is one of the deadliest women in the Silver Empire. But one night while off duty, Kagen is drugged by a woman in a tavern and left weaponless.

The Silver Lands are  quickly overrun, and the entire royal family is killed and burned as a sacrifice to the dark gods of the immortal Gethon Haklan, the Hakkian Witch-King. The once-thriving kingdom is in ruins, and the people are enslaved. Kagen manages to survive by killing an unkillable killing machine with banefire. Kagen doesn't blame the Witch-King or his Raven Warriors who seem to have come out of nowhere and quickly suppressed any threat they may face. He blames himself for allowing himself to be put into a situation where he broke a promise to the Queen to protect her children at all costs.

With his oath broken, and the Gods seemingly turning their backs on him in his time of need, Kagen becomes a wanderer, working odd jobs and trying to take down as many of his enemies as possible. While on the road falling deeper and deeper into malaise and alcoholism, he vows to kill as many of the Hakkian enemy as possible, with the end goal of killing the Witch-King of Hakkia before he can be coronated as emperor. In in a world where forbidden magic is now reawakening and strange things are happening, Kagen isn't the only one Maberry sets on a journey.

There is also the nun Miri and a fifteen year old girl Ryssa who manage to escape the capital city and find themselves in a far off land where things are a bit confusing as well as hinky. What role they will eventually play, really doesn't concern me at this point. Meanwhile, Kagen's only allies are Filia, a female warrior who is Unbladed or Outcast who is on a mission for Mother Frey, Tuke, a man who is as dangerous as Kagen is but without a hoard of enemies wanting his head, as well as Mother Frey who has been around for centuries and can be described as an inquisitor who missed magic making a return to this world and now must fix her error.

Who is the Witch-King that came from nowhere and is so enigmatic with a veil covering his face? Are any of Kagen's brothers still alive, and if so, where are they? Can Mother Frey overcome her errors in not seeing the return of the Witch King? Even though the book ends on a stunning cliffhanger, with a revelation that I think readers will see coming, the epilogue opens a path to the sequel to this book. This book is really dark, and bloody, and at times, Kagen isn't all that likable. He's literally given signs via flashbacks that should have clued him in on what's happening and who is responsible. This is also a new world now that has vampires, and fairies, and even werewolves. Anything is possible with magic roaring back.