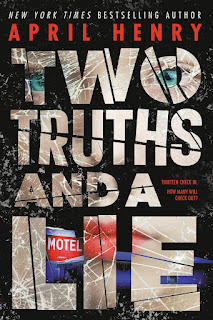 A group of teens are trapped in an old motel with a murderer in this chilling YA mystery by New York Times bestselling author April Henry.

Nell has always wanted to be an actor, but doubts her ability. As a member of her school’s theater program, she prefers working backstage. On the way to a contest, an unexpected blizzard strands her acting troupe in a creepy motel. Soon they meet a group of strangers from another high school—including the mysterious and handsome Knox, who insists they play the game Two Truths and a Lie.

Suddenly a night of harmless fun turns into a matter of life and death. As guests go missing, it becomes clear that a murderer is hiding in their midst ready to strike again. In a room full of liars and performers, the truth is never quite what it seems. Nell is going to have to act like her life depends on it—because it does.

April Henry's Two Truths and a Lie is omage to Agatha Christie’s famous play, Then There Were None. Nell and her theater group, Adam, Jermaine, Raven and Min, along with the group's advisor, Ms McElroy, are traveling across the state for a competition. There will be college recruits there, opportunities for scholarships, and to finally gain recognition for all the hard work they have been putting in throughout high school. Ms. McElroy, has even managed to get a school van which normally is used by the schools sports teams.

But when bad weather forces the group off the roads, they end up at a creepy motel in the middle of nowhere. Soon thereafter, a second group claiming to be robotics students arrive. Ten high school kids, their chaperones, and a handful of other guests spend the nigh in a rundown hotel out in the boonies. While playing a game of Two Truths and a Lie, Nell reads off a piece of paper.

To try and get more answers to the mystery of whether the motel is haunted, the group ends up with a Ouija board. It, of course, replies in Latin. As the teens begin to panic, they also learn that their hotel has a dark past of its own. Back in 1996, a couple was brutally murdered, and the crime has never been solved. It appears that history is now repeating itself when a girl is found hung, and blood is sprayed all over the bathroom.

With the weather outside not letting up, and students go missing, Nell and her friends but try and survive. Things become even more twisted when it appears all of the adults staying at the motel have secrets of their own, including one who talks in the third person, one who may be transporting something highly illegal, and the owner who seems to be everywhere. Could one of them be a killer, and if so, who will be next?

The motel setting is really creepy. From the ill-conceived conference center, a giant common room disturbingly sporting dozens of weird and creepy knick-knacks on the walls, blankets of dust, a strangely vibrant Hawaiian-style tiki hut, a unwelcoming lagoon-style pool, and the oddest assortment of motel staff, and caretakers. If you are looking for a quick read, and don't mind endings that you can pretty much guess, you'll like this book.