#Review - Blood of a Phoenix (Nix #2) by Shannon Mayer #Fantasy 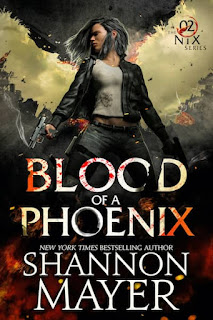 I thought that going after those who’d destroyed my life would help me move on. At the very least, that it would ease the thirst for vengeance singing in my blood. I was wrong.

With my guns at my side, I continue to search for ways to punish the one man who took everything from me. The man who killed my family. Death is far too good for him.

I want to make him suffer, to take from him everything he loves.

To that end, I need a code breaker, one who deals in magical glyphs. But in the hunt for her, I discover there are far more secrets to my life, and my blood, than I ever could have imagined.

Secrets that are burning their way out of the past and the shadows.

A promise dangled in front of me by the enemy of my enemy is too sweet to ignore. And I will cast all my cards on the table for the one chance that the promise he offers is true.

That my son is alive.

God help those who stand between my boy and me.

“Nothing burns hotter than the Phoenix. She will turn you to ash and dust, minion. Run away while you still can.”

Blood of a Phoenix is the second installment in author Shannon Mayer's Nix series. The story picks up where Fury of a Phoenix cliffhanger ended. Nix has gone to hell and back. Her husband (Justin) and son (Bear) were killed in the accident, that wasn't an accident. She was kept hidden from her own family by Abe ever since she broke away from the assassin business. She found hidden papers in Justin's desk, and needs a code breaker which sends Nix and Simon to Seattle where they can locate a girl name Talia to help them decide her late husband’s papers.

Nix also has to worry about the fact that Mancini, leader of the Collective, wants her dead after she destroyed one of his factories. Her father, Luca Romano, who made a deal with a demon, has something precious that Nix wants back badly. We learn a lot about Romano's deal with the devil and a little bit about how it affects Nix. Then, to top things off, Mancini drops a bomb in Nix's lap which sends her off to New York to confirm whether he is telling the truth or not.

After finding a stunning truth, Phoenix chooses to work with Mancini to put an end to Genzo and the production of a substance that can distort abnormals into monsters. We get to know Nix's guns Eleanor and Dinah a little better and learn a bit more about their past with her sister. It’s killing me not to be able to say more about Phoenix’s guns, but that would be a huge spoilers. Killian seems to be an ally, but how far can Nix trust him?

Mancini drops a bomb in the lap of Nix, and now she has even more reason to hate Luca. What is clear is that all is not what it seems in the world of abnormals. Luca wants to control everything. Mancini is playing his own game that may end up catching Nix in a dangerous situation, and Killian is now likely the only real ally she has. Nix must discover her true identity and embrace it before she loses everything she holds dear. Nix will stop at nothing to get her revenge and get her life back, whatever is left of it. But will it cost her the one person she loves the most in this world?

I appreciate those who continue to read my reviews. I also wish that I had finished this series as well as Mayer's Rylee Adamson series sooner.