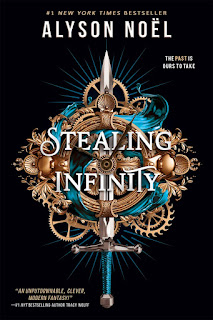 My life goes completely sideways the moment I meet the mysterious Braxton. Sure, he’s ridiculously hot, but he’s also the reason I’ve been kicked out of school and recruited into Gray Wolf Academy—a remote island school completely off the grid. I never should have trusted a face so perfect.

But the reality of why Gray Wolf wanted me is what truly blows my mind. It’s a school for time travelers. Tripping, they call it. This place is filled with elaborate costumes and rare artifacts, where every move is strategic and the halls are filled with shadows and secrets.

Here, what you see isn’t always what it appears. Including Braxton. Because even though there’s an energy connecting us together, the more secrets he keeps from me, the more it feels like something is pulling us apart. Something that has to do with this place—and its darker purpose. It’s all part of a guarded, elaborate puzzle of history and time…and I might be one of the missing pieces.

Now I have all the time in the world. And yet I can’t shake the feeling that time is the one thing I’m about to run out of…fast.

Stealing Infinity is the first installment in author Alyson Noel's Stealing Infinity series. The author has agreed to a series of books that will be released over a course of six months. Anyone who read paranormal in the time of Twilight would be familiar with Alyson’s name and her Immortals series. The story’s jumping-off point is an academy for teens who travel through time, but it gets much deeper than that when we discover the heroine is linked to the (real-life) mysterious Antikythera.

The Antikythera mechanism is an Ancient Greek hand-powered orrery, described as the oldest example of an analogue computer used to predict astronomical positions and eclipses decades in advance. The story is told in the first person narrative by Natasha Clarke. When Natasha was 9 years old, her father disappeared, her mother broke down, and Natasha all but gave up on doing well in order to be the adult in the family. Natasha's only real friend is Mason, as well as a girl named Elodie Blue who acquires as quickly as she discard trouble.

After a night out at Arcana, Elodie finds herself arrested for theft, and kicked out of school. She is recruited to a fancy boarding school called Gray Wolf Academy located on a private island, owned by a extremely wealthy man named Arthur Blackstone and trains for time travel missions. The 100 students who call Gray Wolf home, are separated by colors. Green means you are a newbie, Yellow means you've did well, and Blue is where a core of students like Elodie, Braxton, Jago, Oliver, Song, and Finn belong.

Natasha has a gift and she's been experiencing episodes of Unraveling: seeing, sometimes unexplained, visions through time and memories of her past. As she navigates her way through her new home, the people she thought she knew best might be the most secretive of all. The most secretive may be Braxton who she quickly falls for. Natalie doesn't just going along with things because she felt like she didn't have a choice. She actively tries to figure out what Arthur is up to and why it sees as though a certain character is always around when things go sideways.

There are obviously lots of questions that need to be answers. I want to ensure you folks read the prologue because I think that will give you some idea of what's to come, and what's already taken place. There is a glaring cliffhanger ending which is to be expected. There's also a brief epilogue which features Braxton when he first meets Natasha at Arcana along with Elodie. The sequel is allegedly called Ruling Destiny and it is set to release February, 2023.