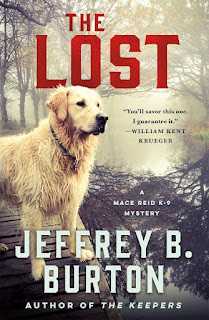 A home invasion turned kidnapping at the mansion of billionaire financier Kenneth J. Druckman brings Mason “Mace” Reid and his cadaver dog, Vira, to this wealthy northern suburb of Chicago. Druckman was assaulted, left behind while his wife and young daughter were taken for ransom.

Brought to the scene by the FBI, Reid specializes in human remains detection, and Vira is the star of his pack of cadaver dogs he’s dubbed The Finders. After Vira finds the dead body of the mother, former supermodel Calley Kurtz, everyone is on high alert to find Druckman’s missing daughter before the five-year-old disappears forever. But the trail Vira finds on the property’s dense woodlands leads right back to Druckman himself.

With the help of Detective Kippy Gimm, Reid and Vira must race against the clock. Nothing is as it appears to be . . . and the red herrings could be lethal.

The Lost is the third installment in author Jeffrey B. Burton's Mace Reid K-9 Mystery series. Key Characters: Mace Reid, specializes in human remains detection. He trains dogs called the Finders to hunt for the dead. Chicago Police Detective Kippy Gimm who has been involved in recent escapades with Mace and has risen in the ranks of the Chicago Violent Crimes Unit. Special Agent Len Squire has become a friend of Mace's thanks to his Finders and what they've done over the course of this series. Vera, Golden Retriever who seems to have preternatural ability of linking a missing or dead person to the killer.

Mace, Kippy Gimm, and Vira are called out to the estate of billionaire financier Kenneth J. Druckman by Special Agent in Charge Len Squires where a home invasion and robbery has turned into a kidnapping. Druckman claims that several men broke into his home, stole all his valuables, and kidnapped his former supermodel wife Calley Kurtz and their 5 year old daughter Eleanor aka Scarf Druckman. After Vira locates Calley, Mace once again senses that Vera knows what really happened, and Kenneth may not be as innocent as you want to believe.

This time the complex plot involves scheming billionaires, deceit, kidnapping, murder, stolen jewels, and more. There are chapters from other characters as well to fill in the blanks as to what has happened before Mace, Vera and Kippy got involved. One of the things the book does do, is go back in time a few weeks, before bringing all key characters together for a twisted ending. We also get an interesting dynamic in that Vira has found Kippy to be trust worthy, and she also latches on to Scarf (aka Eleanor) when the little girl is found.

The relationship between Mace and Kippy continue to develop. They are more than comfortable with each other which is a change after Mace's divorce left him discombobulated and looking for something new to liven up his life. Although this is one of those series where reading the others are not required, I highly encourage it so that you can get a better understanding about Mace and his other Finders which includes Delta Dawn, Maggie May, Billie Joe, and Sue.