#Review - Our Crooked Hearts by Melissa Albert #YA #Contemporary #Fantasy 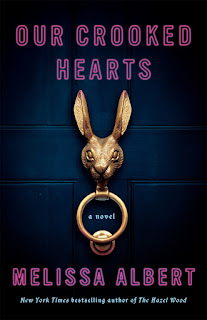 The suburbs, right now . . .
Seventeen-year-old Ivy’s summer break kicks off with an accident, a punishment, and a mystery: a stranger whose appearance in the middle of the road, in the middle of the night, heralds a string of increasingly unsettling events. As the days pass, Ivy grapples with eerie offerings, corroded memories, and a secret she’s always known—that there's more to her mother than meets the eye.

The city, back then . . .
Dana has always been perceptive. And the summer she turns sixteen, with the help of her best friend and an ambitious older girl, her gifts bloom into a heady fling with the supernatural. As the trio’s aspirations darken, they find themselves speeding toward a violent breaking point.

Years after it began, Ivy and Dana's shared story will come down to a reckoning among a daughter, a mother, and the dark forces they never should’ve messed with.

Melissa Albert's Our Crooked Hearts takes place in a town called Woodbine. The story is set in two worlds: modern days from Ivy's perspective and past days from Dana's perspective. While riding with her inebriated boyfriend Nate one night, Ivy has an unsettling run-in with a strange girl. The even more unsettling part is that this stranger somehow knows Ivy's name. This night sets off a bomb in Ivy's life as secrets that have been forming since her closed-off mom was her age finally come to light.

In order to do that, though, Ivy needs to go down the dark, twisted path laid before her and discover more about herself and her mother than she ever thought possible. This book is also about her mother, Dana. When Dana was sixteen, she met a girl named Marion who taught her and her best friend Felicita (Fee). But this girl isn’t being completely honest about her intentions. This leads the girls into contending with magic that they are not prepared for the severe consequences.

For years, Dana fully believed that she was protecting Ivy and her family from magic and her own dark past for fear it would destroy them. But her secrets end up destroying the family dynamics. Especially after Ivy ends up confronting Dana's deep dark secret that she's tried so hard to protect. When Dana and Fee go missing, strange things start happening. The girl she has seen in the woods lurking around her house and the boy next door she has complex feelings insists she broke his heart five years ago. Could she forget something important like this?

Especially after Ivy learns that she and Billy had shared things that slowly are revealed until there are no longer secrets between the two of them. And, even though Ivy's discoveries about her mother's past allow her to finally understand her actions, understanding doesn't always lead to forgiveness, and that's perfectly acceptable. Not to be forgotten, the girl that Dana and Fee met all those years ago, has been slowly scheming and making her own path to revenge. Who better to lure to her side than Ivy whose eyes are fully opened to her mothers betrayal.

One could say that this is the perfect coming age story for both Dana and Ivy. I have heard that there are those who compare this book to the Craft, and those reviewers aren't wrong. While it begins with just Dana and Fee, it ends up becoming more like their own twisted coven.