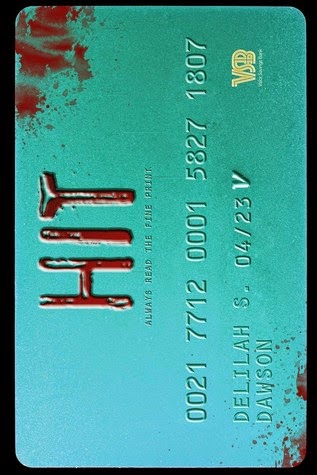 The good news is that the USA is finally out of debt. The bad news is that we were bought out by Valor National Bank, and debtors are the new big game, thanks to a tricky little clause hidden deep in the fine print of a credit card application. Now, after a swift and silent takeover that leaves 9-1-1 calls going through to Valor voicemail, they’re unleashing a wave of anarchy across the country.Patsy didn’t have much of a choice. When the suits showed up at her house threatening to kill her mother then and there for outstanding debt unless Patsy agreed to be an indentured assassin, what was she supposed to do? Let her own mother die?Patsy is forced to take on a five-day mission to complete a hit list of ten names. Each name on Patsy's list has only three choices: pay the debt on the spot, agree to work as a bounty hunter, or die. And Patsy has to kill them personally, or else her mom takes a bullet of her own.Since yarn bombing is the only rebellion in Patsy's past, she’s horrified and overwhelmed, especially as she realizes that most of the ten people on her list aren't strangers. Things get even more complicated when a moment of mercy lands her with a sidekick: a hot rich kid named Wyatt whose brother is the last name on Patsy's list. The two share an intense chemistry even as every tick of the clock draws them closer to an impossible choice.

Delilah S. Dawson's Hit is a story that isn't too far out of the realm of possibilities for a country, like the US, that has borrowed trillions dollars and continues to have unfunded liabilities that they can't pay back. Imagine, however, that instead of allowing the US government to continue it's spending and borrowing ways, a rather large bank (Valor Savings) steps in and buys the countries entire debt back. Now, imagine if people didn't read the fine print when applying for credit cards or mortgages that give said bank the right to kill you if you can't pay the debt back immediately upon demand.

Imagine a man dressed in black showing up at your door and pointing a gun at your mother while demanding a rather large debt to be paid back immediately. Imagine that you are a 17-year old teenager who, in order to save your mother's life, must become a bounty hunter and kill 10 people over a span of 5 days or face death herself. To those on the Hit list she's provided, Patsy must offer them (3) choices: pay the debt, agree to work as a bounty hunter like her, or die by her hand. Simple right? Or, is it?

Patsy Klein is a character that I didn't have any problems understanding or connecting with. She's caught between a rock and a hard place, and has to fight for who she is, who she loves, and to become someone else entirely in order to survive. She's not necessary a whiny character, but she does have emotions that show she hasn't fallen too far down the rabbit hole. She has to fight for her mother who is frail, weak, and basically down for the count after a series of unfortunate events. Patsy's journey is a personal one as well. The one question that hangs over everything she does is the whereabouts of Patsy's father and why he left 13 years ago. Everything that Patsy deals with in this story connects to events or people she knows which will crack the coldness of your heart.

This story absolutely makes sense in many ways, in others perhaps it's a bit on the satirical side. This is a dystopian reality that is not too far out of the realm of possibility. Whereas others like zombies, or climate change, or what have you, are a bit over the top, and belong in the science fiction genre. Hit absolutely makes me happy that I don't carry any credit cards, or mortgages, or any other debt, including school loans. It makes me happy that this is fiction and not reality.

Although this is fiction, perhaps the politicians of both parties in this country and those who owe tons of money they borrowed but never intended to pay back, should take a moment and read this story. In fact, let's imagine that instead of Valor Savings showing up demanding that you pay their money back, it's a country like CHINA that shows up demanding immediate payback for all the money that the US has borrowed from them over the years. Can you even imagine for one single moment what would happen? I'm not a conspiracy theorist folks but I definitely can.

Hit reminds me of the movie The Purge where people have the legal right to kill anyone they want one time a year. Patsy and others like her, are, in a way, purging the country of anyone too far in debt. This isn't a book that you will walk away from without making some comments or having different feelings. I can't for the life of me imagine anyone forcing me to kill 10 people in order to save a loved one's life. I can't imagine how easily Wyatt, the love interest, accepted what Patsy was doing and ended up helping her even though he had is own pain to deal with.

Hit ends on a bit of a cliffhanger and there are so many different questions that I have about the bank, about the competition, about why Patsy was really chosen, that I will most likely read the sequel, Strike, when it comes out March of 2016.