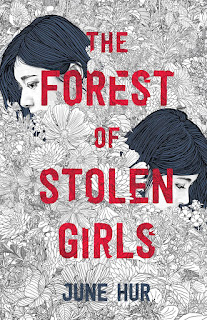 After her father vanishes while investigating the disappearance of 13 young women, a teen returns home to pick up the trail in this YA historical mystery from the author of The Silence of Bones.

1426, Joseon, Korea. Hwani's family has never been the same since she and her younger sister went missing and were later found unconscious in the forest, near a gruesome crime scene. Years later, Detective Min—Hwani's father—learns that thirteen girls have recently disappeared under similar circumstances, and so he returns to their hometown to investigate. . . only to vanish as well.

Determined to find her father, Hwani travels home to pick up the trail. As she digs into the secrets of the small village—and reconnects with her now-estranged sister—Hwani comes to realize that the answer lies within her own buried memories of what happened in the forest all those years ago.

Suspenseful and richly atmospheric, June Hur's The Forest of Stolen Girls is a haunting historical mystery sure to keep readers guessing until the last page.

Author June Hur's The Forest of Stolen Girls is a historical fiction/mystery that takes place in 1426, Joseon (Korea). A year after her father, Detective Min Jewoo, vanished while investigating the disappearance of 13 young women in 4 years, Min Hawani returns to her former home of Jeju Island hoping to pick up his trail. Min's father solved almost every case that was handed to him, except for the Forest Incident involving his own daughters which tore the family apart.

Hwani is determined to find the truth behind her father's disappearance no matter how ugly the truth may be. Hwani must work with her estranged sister Maewol, a shamanic apprentice, who may hold the key to Hwani's success. All thirteen girls were allegedly in the forest when they disappeared and there have been repeated reports of a masked man in the vicinity. Years before, Hawani and Maewol had their own individual experiences with nearly being taken by the unknown masked person.

Hawani is determined to follow the clues and make logical deductions just as her father would. Maewol wants to help, but her work in the shaman's hut seems to be at odds with the evidence. Hawani has to realize that the father she knew, is different than the one her sister knew. That her father was, after all is said and done, just human. Hwani and Maewol have a bit of a rocky relationship. Happens when there is a gap between younger and older sister. While Hwani feels like the cold steel of determination, Maewol feels like the warm fire, determined to burn to where she needs to go

The historical aspect of the mystery did not disappoint. Hur illuminates a lesser known part of Korean history; the tribute women. Young women aged 12 thru 18 were sent to appease the Ming dynasty emperor of China. Commonly known as comfort women, these women and girls were also known as ‘kongnyo’ or tribute women. This practice continued right into the 20th century. When families of Korea had a daughter, they immediately hid and disfigured their daughters so that they would not be stolen away from them and never seen again. At the time of this story, Joseon (Korea) was under Mogul rule. Later, the Ming Dynasty continued the practice of taking women and girls every 3 years.