#Review - Ravage the Dark by Tara Sim #YA #Fantasy 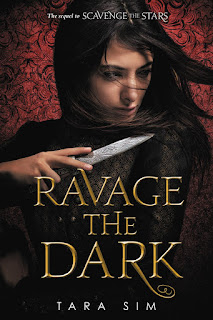 Step into an opulent world filled with risk, romance, and revenge and find out whether two unlikely heroes can save the world and stop corruption.

For seven long years, while she was imprisoned on a debtor's ship, Amaya Chandra had one plan: to survive. But now, survival is not enough. She has people counting on her; counting on her for protection, for leadership, for vengeance. And after escaping Moray by the skin of her teeth, she's determined to track down the man who betrayed her and her friends.

Cayo Mercado has lost everything: his money, his father, his reputation. Everything except his beloved sister. But he's well on his way to losing her, too, with no way to afford the treatment for her deadly illness. In a foreign empire also being consumed by ash fever, Cayo has no choice but to join Amaya in uncovering the mystery of the counterfeit currency, the fever, and how his father was involved in their creation. But Cayo still hasn't forgiven Amaya for her earlier deception, and their complicated feelings for each other are getting harder and harder to ignore.

Through glittering galas, dazzling trickery, and thrilling heists, Cayo and Amaya will learn that the corruption in Moray goes far deeper than they know, and in the end the only people they can trust are each other.

Ravage the Dark is the second installment in author Tara Sim's Scavenge the Stars duology. This story once again focuses on two main characters: Amaya Chandra and Cayo Mercado. 7-years ago, Amaya aka Silver Fish, was sold to a debtor ship Brackish to pay off her father's debts. For years, Amaya tried to save enough money to pay off her debts. Then she met a man named Boon who claimed he was rich beyond her dreams and needed her help with a bit of revenge on those who destroyed his life.
Amaya chose a path of vengeance against the man who put her there and those who ruined her father and sent her mother scurrying to pay off her debts the only way she knew how by selling her own daughter. Amaya as Countess Yamaa met Cayo Mercado who just happens to be the son of the man who destroyed her life. Cayo was a boy who loved to gamble and drink heavily and he didn't care one bit who he slept with as long as it took away his pain. Cayo was trying to do the right thing when it came to his sister Sonia who has come down with a strange illness called Ash Fever.
After fleeing the city of Moray by the skin of their teeth, Amaya, Remy, Liesel, Deadshot and Cayo head to a foreign land in hopes of saving Cayo's sister Sonia who has been infected with the Ash Fever thanks in large part to Amaya's own actions in wanting to get revenge on those who took away her parents. Amaya carries a huge guilt trip for a large part of this story. She betrayed Cayo. She helped Boon with his so called revenge plot. She spread counterfeit coins far and wide while pretending to be someone rich and powerful from a far off land.
Amaya also has to face the truths about her own family and what they were up to. Cayo isn't the only one whose own family did something really unhinged which led to lots of people getting hurt or dying thanks to the Ash Fever which has now jumped from Moray to the Rain Empire. I think the most interesting aspect of this story is Amaya coming face to face with the truth about her own mother and father and what they were up to. The secrets that they kept, the depths they went to protect themselves at the expense of their own daughter who has grown into being a powerful force to be reckoned with.
This duology began with the story being called the reimagining of the Count of Monte Cristo. The story twists and turns and tosses in a few surprises along the way. This is a world that is in shambles. Moray is close to being bankrupted and overrun by competing empires. There are also instances of sadness and loss and all because of a revenge plot gone wrong. Family plotting against Family. In the end, Blood is more costly than any coin or jewel and Amaya and Cayo find themselves struggling to once again trust the other. Her betrayal made him distance himself for a large portion of this book, but life is so unfair and full of sorrow sometimes that you must take joy whenever you can and that forgiveness is very important.