#Review - Pride and Premeditation by Tirzah Price #YA #Mystery 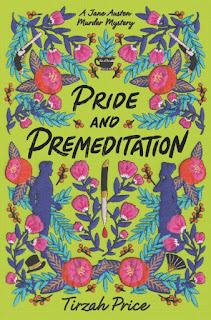 Three of Jane Austen’s classic novels receive a murder mystery makeover in this romantic and thrilling three-book series that’s perfect for fans of The Lady’s Guide to Petticoats and Piracy and Stalking Jack the Ripper. In Pride and Premeditation, aspiring lawyer Lizzie Bennet attempts to solve a murder case while fighting off feelings for her rival Mr. Darcy.

It is a truth universally acknowledged that a young woman who desires a law career must be in want of a case. So when a scandalous murder shocks London high society, seventeen-year-old Lizzie Bennet sees the perfect opportunity to prove herself as a formidable solicitor—despite the fact that women are only allowed in court as witnesses.

Unfortunately for Lizzie, the man accused of the crime already has a fledgling lawyer on his side: Mr. Fitzwilliam Darcy, the stern young heir training to take over the prestigious firm Pemberley Associates. Convinced the authorities have blamed the wrong person, Lizzie vows to steal Darcy’s client and solve the murder so that she can earn a position of her own. But as the case—and her feelings for Darcy—become more complicated, Lizzie discovers that her dream job could make her happy, but it might also get her killed.

“It is a truth universally acknowledged that a brilliant idea, conceived and executed by a clever young woman, must be claimed by a man.”

Pride and Premeditation is the first installment in author Tirzah Price's Jane Austen Murder Mystery series. This is the first in a series of books reimagining Austen classics, and will be followed by Sense and Second-Degree Murder and Manslaughter Park. All three books will focus on Elizabeth "Lizzie" Bennet as the main character. Lizzie Bennet has always been a spitfire, but readers will love this new twist where she must deal even more explicitly with the issue of being female in a man’s world. Pride and Premeditation is the retelling of Pride and Prejudice, of course!

While the plot has changed, fan favorite characters and relationships remain, from the infuriating Mr. Collins to flighty Mrs. Bennet and of course a swoon-worthy yet stubborn Mr. Darcy. However, all of them are cast in a new light, given the fresh story line. Lizzie Bennett is the second oldest daughter of Mr. Bennett with Jane being the oldest. She works for  Longbourn and Sons law firm as an unofficial accountant and assistant. Lizzie longs to prove herself to her father, as well as making sure that the bumbling junior partner Mr. Collins stops taking credit for her work.

Determined she will one day be a barrister, she implores Mr Bennet to employ her as a solicitor, and is told she needs to find her own case and prove herself first. So, after she hears about a man named Charles Bingley being charged with murder, Lizzie is determined to acquit Mr. Bingley and at the same time convince her father that she is a worthy addition to his law firm. She charges ahead full speed in hopes of proving herself worthy of becoming her father's heir.

While at Newgate Prison, Lizzie meets Bingley's paid solicitor, Fitzwilliam Darcy who is a lawyer for the Pemberly and Associates law firm. Pemberly just happens to be the most renowned firm in all of England. Darcy is not only dismissive but also insulting towards her. Thankfully, Bingley isn't so arrogant not to take the help when it's offered.

Lizzie must jump over hurdles, including those of her own mother who demands that she marries, in order to solve the mystery that may set her on a path to self-determination. Lizzie loves to remind her father that the only way to get his attention is by using Aristotle's methods of persuasion:

Ethos could be called ‘credibility’ or ‘ethical appeal’. Here, the character of the author itself is a persuasive factor: people tend to believe and follow those whom they respect. To be successful at this, the writer has to project the impression to the reader that he or she is someone worth listening to, an authority on the subject of the writing, but also someone who is likeable and worthy of respect.

Pathos appeals to the reader's emotions to effect change. Emotion means that we involve what’s been called the ‘limbic system’, that part of a human being’s make up which isn’t entirely rational but rather is instinctive.

Logos means persuading by the use of reasoning, hence ‘logical’. This was Aristotle's favorite - it was after all the form of persuasion used by him to try to persuade us about persuasion - and it breaks down into deductive and inductive reasoning. Logic relies on definitions, analogies, comparisons, parallel cases. Testimonies or authorities and the views of experts play a part as well as statistics.

While the mystery was easily solvable by the reader, you could easily have fingered any number of individuals. The relationship between Lizzie and Darcy is pretty much everything you expect. There's conflict, there's ongoing banter on who will be the first to solve the mystery. And, of course, there is a long drawn out hint of romance that ends the story. The bad is that except for Jane and Lydia, Lizzie's youngest sisters are mostly kept in the background and not really serious participators in the story.

Reviewers are talking about Charlotte Lucas who is a mixed raced female who is Mr. Bennett's secretary. The attention is given because the author chose to add a woman of color to the story who actually has a really good job, but little opportunities to marry someone of standing. Lizzie also has a heart of gold when it comes to street urchins. In fact, she uses several of them on a regular basis to provide her with street information that is very useful to her case.