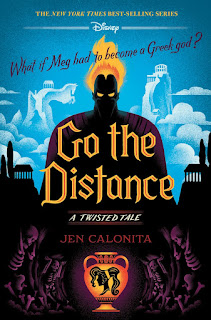 Catalog Copy: The 11th installment in the New York Times best-selling A TWISTED TALE series asks: What if Meg had to become a Greek god?

After Hercules proves he's a true hero and regains his godship, all seems right in the world. That is, until Zeus tells Meg that she can't be with Hercules because she's, well, mortal. Luckily, Hera has a solution, offering Meg a chance to prove herself worthy of a spot on Mt. Olympus--as a god. All Meg has to do is complete a mysterious quest.

The mission? Oh, just to rescue her ex's current wife from the Underworld. The ex-boyfriend she saved by selling her soul to Hades. The ex-boyfriend who immediately moved on to someone else while she was stuck in the Underworld. Can Meg put her past behind her and use her quick-wit to defeat monsters and gods alike, including the nefarious Hades? Will she finally figure out her place and contribution to the world? Or will her fear of commitment have her running away from an eternity of godhood with Herc?

Written by the author of Mirror, Mirror and Conceal, Don't Feel, Jen Calonita's latest twist is sure to delight and surprise.

Jen Calonita's Go the Distance is the eleventh book in the successful Twisted Tale YA line which takes classic Disney films and twists them into compelling, aged-up adventures. The premise of the story is, what if Meg had to become a Greek god in order to have her Happy Ending with Hercules? Picking up directly after the events of the Disney animated movie, Hercules, Go the Distance, after being refused entry into Mount Olympus by Zeus because she's human, Megara is offered a dangerous quest by Hera in order to prove herself and earn a spot on Mount Olympus.

Hera comes up with a fair solution and that is to offer Meg a chance to prove her worth and earn a spot among the Gods on Mt. Olympus. All she has to do is complete a quest in 10-days. The first part of her quest sends Meg off to find the lost flute (aulos) of Athena. The last time Meg made a deal with a God, she lost her soul to Hades. Meg's journey takes her to the Cyclades where she encounters an Empusa; a vampire beast known to seduce men.

The flute is said to be able to put Cerberus asleep which is a good thing since Meg will once again have to travel to the Underworld in order to find the soul of the woman named Katerina who married Meg's former lover, Aegeus. For some reason, the Gods feel responsible for Katerina's death and want to redeem themselves through Meg. Joining her for support is Philoctetes, better known as Phil. The coach to the Gods, as well as Pegasus aka Peg. Phil is a hero of the Trojan War.

As she tries to complete her quest in time, she has some support from some very powerful women like Hera, Athena and Aphrodite. And, even though Persephone is a self centered ass at times, Meg's journey wouldn't be complete if she didn't try to make her happy even though she has ever reason in the world to hate both her and Hades. Meg is given the opportunity to succeed, to fail, to lean on the assistance of others, to face destiny on her own, and essentially forge her own path into the halls of Mt. Olympus.

Meg's character development throughout this book was so profound and much needed. From her past issues, to her future possibilities, everything is on the pages in front of you. Throughout her journey, I loved seeing her peel back the layers of these issues one by one and put them on display for the readers. Succeed or fail, Meg was going to do things her own way and damn the consequences should she not complete the quest on time.

For more twisted adventures, try the other books in the A TWISTED TALE series: