#Review - The Bronzed Beasts by Roshani Chokshi #YA #Fantasy #Historical 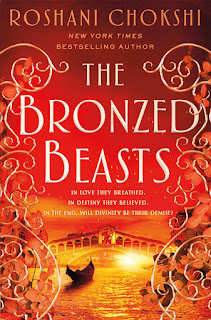 Returning to the dark and glamorous 19th century world of her New York Times instant bestseller, The Gilded Wolves, Roshani Chokshi dazzles us with the final riveting tale as full of mystery and danger as ever.

After Séverin's seeming betrayal, the crew is fractured. Armed with only a handful of hints, Enrique, Laila, Hypnos and Zofia must find their way through the snarled, haunted waterways of Venice, Italy to locate Séverin. Meanwhile, Séverin must balance the deranged whims of the Patriarch of the Fallen House and discover the location of a temple beneath a plague island where the Divine Lyre can be played and all that he desires will come to pass. With only ten days until Laila expires, the crew will face plague pits and deadly masquerades, unearthly songs and the shining steps of a temple whose powers might offer divinity itself...but at a price they may not be willing to pay.

The Bronzed Beasts is the third and final installment in author Roshani Chokshi's The Gilded Wolves trilogy. The Silvered Serpents ended on a cliffhanger and now we'll see Severin & crew face incredible odds in their fight to save Laila & keep their friendship from crumbling. Set in a beguiling and fog-filled Venice, Severin is faced with godhood, Laila is faced with her own mortality, and Enrique, Zoya, and Hypnos come to terms with their impossible mission: defeat Ruslan, save Laila, and overcome Séverin's betrayal.

After leaving his friends behind, Séverin bides his time with Ruslan, Patriarch of Fallen House, trying to learn the location of the temple where the lyre can be played to make him a god.  Séverin has no idea that Laila has smashed the recording bug that he left behind telling his friends where to meet him and what really happened in Russia. When they don't show up as planned, Séverin fears that Ruslan figured out his game, and has done something to prevent the reunion.

Séverin has always been the planner of the group, the one who's always leading them, the one who the group trust to fix everything. So, when the crew does things without him, it proves that these 5 characters are a force to reckon with. Meanwhile, the rest of the crew is dealing with the effects of Séverin's betrayal. Even after Hypnos reassures them that it was a ruse, Enrique has a hard time trusting him, especially after having lost an ear.

Enrique, who is good at history, languages, myths and legends, is rethinking his own personal decisions and how he hasn't exactly made a mark on the world like he had planned. But he knows that with time running down for Laila he needs to put his anger behind him to save her. Laila's clock is ticking down to zero, and she's close to accepting the idea that there's no hope. Can she ever forgive Séverin's betrayal? Before meeting Séverin, Laila was treated as something different, something no altogether human.

She's the mom of the group. She's the one who will bake cakes, and cookies just because. She's your favorite character because you want her to be successful and not succumb to time. Zofia carries a letter from her sister but refuses to open it fearing it might be the worst news possible. Zofia is brilliant but also likely has autism but on the high scale. She can function without much pushing, and she's remarkable in almost every aspect. She's able to create marvelous things and doesn't normally panic when things are looking gloomy.

I think in many ways, the ending is damn near perfect. We see things that happen to each of these characters over the course of say, 100 years, and what comes of them, including Laila and whether or not Séverin gets his wish of becoming a God.

Zofia noticed that it was Laila he looked at last. It was a familiar pattern. In L'Eden, whenever Severin made plans, he always looked at Laila. To see him do it again made Zofia think of all their former patterns. It was like physics, the study of working mechanisms and the interplay of light. Laila was a fulcrum, the point around which all things in their group seemed to pivot. Severin was mass, the weight that changed their direction. Enrique gave them depth. Zofia hoped she offered light. She was not sure what Hypnos contributed to the group, but she could not imagine it without him. Perhaps that made him perspective.